The philosophy of Shotokan Karate is centred upon Gichin Funakoshi’s precepts. Funakoshi talked about Twenty Precepts of Karate (Niju Kun). These principles are derived from Zen and Bushido. As with most traditional martial arts, karate seeks to develop the character and esteem of its students. The individual practitioner (karate-ka) can develop respect, control, calm temperament and humility. ‘Dojo Kun’ are a set of five rules which may be recited at some point during a class in order to set the atmosphere for training with a correct attitude. Each Dojo Kun begins with the number one. This signifies that no one precept is more important than another. Funakoshi’s literature talks about the higher importance of dealing with spiritual issues over physical ones. Karate-do (the way of karate) is a beautiful art when practised with the correct attitude however it is open to abuse. This is why a student should try to understand the philosophy of karate at the same time as learning to use the skills and techniques. One particular quote illustrates this, ‘to win a hundred battles is not the highest skill. To subdue the enemy without fighting is the highest skill.’ 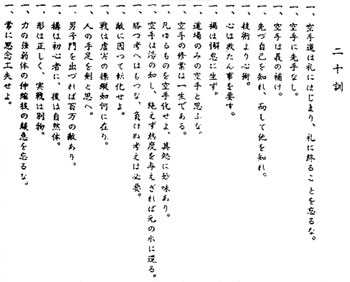 * Karate training is more than just the dojo

*  Training begins and ends with a bow of respect

*  The practitioner follows a just route

*  Know about yourself before you can know others

*  Spiritual development is the first focus, and then later technical ability

*  Empty or release your mind

*  The lazy will not have good fortune

* Use karate principles in everything

* Do not think that you must win, but alternatively that you don’t have to lose

* Victory can come from knowing how to differentiate vulnerable points from invulnerable ones.

* Move according to your opponent

* Respect your opponents’ hands and legs as being like sharp swords

* Be alert to opponents in all areas

*  Ready positioning for beginners and natural position for advanced

* Strength and weakness of power, expansion and contraction of body, speed and slowness of technique

*  Devise at all times